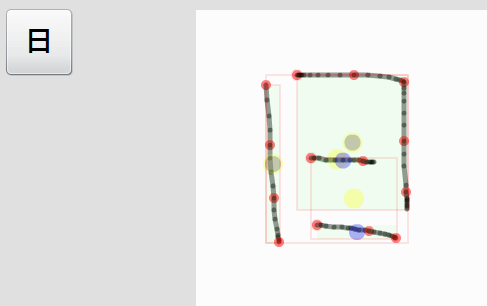 Unlike the iPad, the BlackBerry PlayBook has rather poor international keyboard support, with no method for entering chinese characters. I like the way iOS achieves this, so went about building my own version in ActionScript.

This was mainly an academic exercise and to help me to learn to write chinese. My approach was to sample the strokes drawn into the app as a series of up to 8 directions, including the relative position of a given stroke to the previous stroke, again as one of 8 directions. This pattern, represented as a string of numbers is then put through a smoothing algorithm, to remove some unnecessary noise and then compared with a dictionary of pattern keys, which may contain one or more suggested characters. If there are no hits, an advanced search occurs, by mutating the given pattern in specific ways, in order to find alternative suggestions. I can also find characters based on the next most likely character to the one you’ve just entered, using frequency analysis on given sample text.


The app will eventually be a PlayBook App, but is still unfinished and currently in ‘training mode’, so that character patterns can be trained into the database. It’s currently primed with some simplified sample data, from which it picks the most popular few characters to learn. If you write chinese, give it a go.