I was asked by Tribal/DDB London to create a web based games site, for a joint campaign between The David Beckham Academy and Volkswagen.

We decided to use filmed action of Beckham himself in-game, using the ‘video with alpha’ support of Flash 8, which was very new at the time. I came up with the game concepts and shot list, then met with the film crew at ‘Off The Radar’ to organise the shoot with Beckham. We had less than an hour of Beckham’s time to shoot everything, but he was a complete pro, completing most of the action in one take! 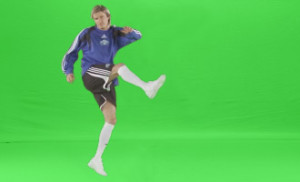 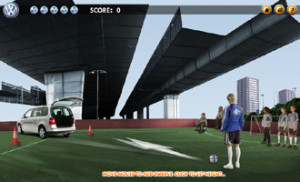 I went to Madrid for the green screen shoot with Beckham as visual effects supervisor and was responsible for treating and editing the footage for game production and related media. 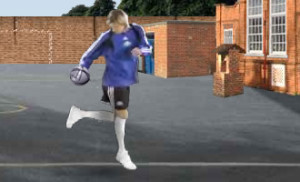 between shots and added real-time lighting filters to the footage to help with the in-game compositing.

I coded a 3-D projection system in Flash and perspective-matched each scene, so that objects move around the screen convincingly. I worked with the designers at DDB, who created the backgrounds and UI elements. I included ‘Express Install’ capability for those users without Flash Player 8, so 95% users could upgrade painlessly from Flash Player 6 or 7. All the games are mouse-controlled and were user tested with children for usability and game balancing.

A high-score table and ‘challenge a friend’ feature was included – users with the highest scores were entered into a prize draw to win a training day at the academy with David Beckham. While modern video games only ever motion-capture players and recreate them as 3-D models, the DBA games site, while it’s dated a little over the years, still remains a one-of-a-kind that I’m rather proud of.

By the way, there are a few ‘Easter eggs’ in the game, only one of which I can remember at the moment: in the ‘Shot Stopper’ game, type ‘safehands‘ to get some big gloves to make savings goals easier.